This indicator measures the performance of HIV programs in scaling up TPT, with the goal of preventing progression to active TB disease among PLHIV and decreasing ongoing TB transmission in this population.

As part of a cascade from TX_CURR to TB screening (captured in TX_TB), this indicator will inform programs on the pace of scale-up, and the proportion will allow for monitoring of cohorts through completion of therapy.

Disaggregates on the timing of ART and age/sex breakdowns will allow programs to monitor those who are newly starting ART, an important focal population in all countries and in particular in countries that have already provided TPT for many of their PLHIV in care.

Among those who started a course of TPT in the previous reporting period, the number that completed a full course of therapy (for continuous IPT programs, this includes the patients who have completed the first 6 months of isoniazid preventive therapy (IPT), or any other standard course of TPT such as 3 months of weekly isoniazid and rifapentine, or 3-HP)

The TB_PREV denominator and numerator should be analyzed independently of other data and the results reported in Q2 and Q4 should be summed to calculate the total number of ART patients who initiated and completed a course of TPT.

The denominator can be generated by counting the total number of patients who initiated any regimen of TPT in the semiannual reporting period that is prior to the one being reported on. For example, if reporting is for Q1 and Q2 of a fiscal year (e.g., October 2019 to March 2020), then the denominator would include those that were started on TPT in Q3 and Q4 of the previous fiscal year (e.g., April to September 2019). If a TPT register is being used, then this would require simply framing out the dates that define the previous reporting period and counting all those who started TPT.

Importantly, programs should ensure that patients on continuous isoniazid therapy are counted only once, when they initiate therapy (denominator) and after they complete the first six months (numerator); care should be taken to ensure they are not included in future calculations.

The numerator can be generated by counting the subset of patients from the denominator who received at least six months of IPT or have completed another standard course of TPT. If a TPT register is being used, this would require framing out the dates that define the previous reporting period, identifying those that initiated TPT during the reporting period (the denominator) and then documenting the number of those patients who completed the course of TPT that they started during that reporting period. This should include the patients who completed a shorter alternative course, such as 3-HP, as well as those who are on prolonged or continuous IPT who have completed their first six months of therapy.

These data elements can be collected from the ART register or from separate TPT registers. In some countries, TB presumptive registers might contain this information as well, but the information will need to be cross referenced for ART status.

Data Element ≥ subtotal of each of the disaggregations.

The numerator is generated by counting the number of PLHIV on ART from the previous reporting period who were documented as having received at least six months of IPT or having completed any other standard course of TPT (such as 3-HP).

Provision of key staff or commodities for routine HIV-related services includes: ongoing provision of critical re-occurring costs or commodities (such as ARVs, TB preventive therapy and diagnostic/screening tests) or funding of salaries or provision of Health Care Workers for HIV clinic services. Staff responsible for maintaining patient records in both HIV and TB clinics are included in this category however staff responsible for fulfilling reporting and routine M&E requirements are not included.

*see the next page for visual example* 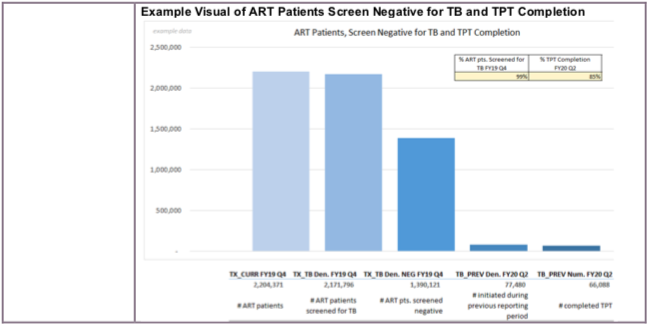