(PP_PREV) Number of priority populations (PP) reached with the standardized, evidence-based intervention(s) required that are designed to promote the adoption of HIV prevention behaviors and service uptake

Number of priority populations (PP) reached with the standardized, evidence-based intervention(s) required that are designed to promote the adoption of HIV prevention behaviors and service uptake
Rationale

Children aged 9-14 who are receiving an approved primary prevention of HIV and sexual violence intervention should be reported under OVC_SERV and not PP_PREV. Please see the OVC_SERV reference sheet for further detail.

HIV testing services (HTS) or referring an individual to HTS is required to be offered (at least once during the reporting period and/or in accordance with WHO/national guidance) unless the individual had previously been tested positive for HIV. If the individual is self-identified as HIV positive, then HTS provision or referral to HTS will not be a required element of this indicator.

Conducting risk assessments or screening to determine the need for HIV testing also meets the HTS component of PP_PREV. For example, if there is a ten-year-old girl enrolled in DREAMS, we would anticipate that she would not need to be tested for HIV if a risk assessment determines that she is not sexually active, and she does not have any additional risk factors for HIV.

The table below lists the interventions that must be offered in addition to HTS (or HTS screening/referral). 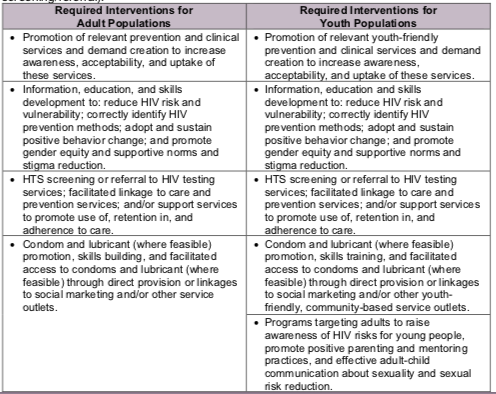 Sum across both reporting periods; de-duplicating unique individuals already reached and reported in Q1-Q2 of the same fiscal year in Q4 reporting.

Data collection requires reliable tracking systems that are designed to count the number of one-on-one encounters or participation in group interventions and that reduce double-counting of individuals in a reporting period. Data should be collected at every encounter/point of service and aggregated in time for PEPFAR reporting cycles. This indicator only counts those interventions at the individual and/or group level.

A partner may count an individual (with unknown HIV sero-status or self-identified as HIV negative) as having received a prevention intervention if they have provided HTS and/or referral to HTS AND at least one of the other listed prevention interventions during the reporting period. If an individual is already known to be HIV positive at the time of service delivery, s/he should receive at least one of the interventions listed in the table (outside of HTS) to qualify as being counted under this indicator.

Furthermore, de-duplication of all returning beneficiaries within the Q3-Q4 reporting period (April 1 – September 30) will also need to take place in Q4 reporting if they had already been counted under PP_PREV in Q1-Q2 of the same fiscal year. For example, if an individual had received prevention interventions under PP_PREV through PEPFAR-supported program in January 2017 and was counted as being reached in FY17 Q2 reporting cycle, and this same individual was later reached with prevention services again by PEPFAR-supported program in June 2017, that individual should NOT be reported again in the FY17 Q4 reporting period. This de-duplication is critical to accurately track the ANNUAL number of unique individuals reached by PEPFAR within a given fiscal year. Trend analysis of past performance PP_PREV data will be adversely affected with the change in frequency of PP_PREV reporting from annually to semi-annually if this de-duplication is ignored (i.e., annual number of PP_PREV reported within the same fiscal year would be inflated as the same individual would be counted twice if this de-duplication does not occur at Q4 reporting).

If possible, a unique identifier should be assigned to program participants or names can be collected to track individual participation in the prevention interventions/sites.

Site (facility and community) level system should maintain accurate registers for each individual priority population and sum these individual populations when reporting this indicator.

Data should be reviewed regularly for the purposes of program management, to monitor progress towards achieving targets, and to identify and correct any data quality issues.

Testing services disaggregates should not exceed the numerator. 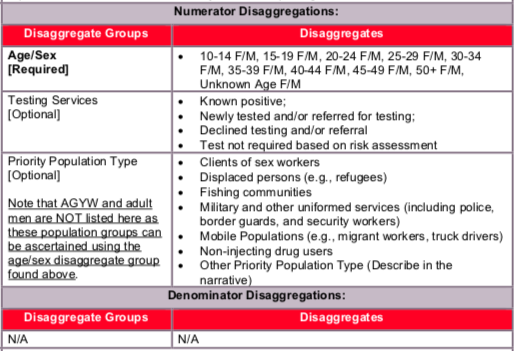 Provision of key staff or commodities for priority populations receiving HIV prevention services includes: ongoing procurement of critical commodities such as condoms, teaching materials, or community promotion materials; funding for salaries of personnel who deliver components of the intervention; or paying for transportation of those staff to the point of Service delivery. Staff responsible for the completeness and quality of routine patient records (paper or electronic) can be counted here; however, staff who exclusively fulfill MOH and donor reporting requirements cannot be counted. 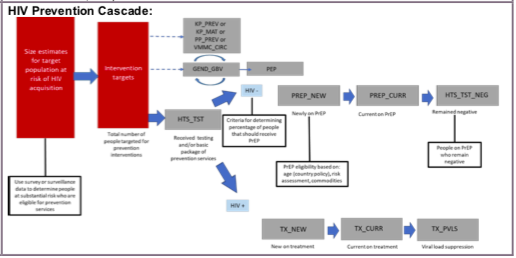