This is the first MER indicator to monitor PEPFAR programming of HIV self-testing approaches and distribution HIV self-test kits.

HIV self-testing refers to a process in which a person collects his or her own specimen (oral fluid or blood), performs an HIV test, and then interprets the results. This is often done in a private setting, either alone or with a trusted person. HIV self-testing is a screening test and requires self-testers with a reactive (preliminary positive) result to receive further testing from a trained provider using a validated national testing algorithm. HIV self-testing approaches range from unassisted self-testing (with limited or no instruction provided) to directly assisted self-testing (where a testing provider demonstrates how to use the self-test kit). Self-test kits can be distributed in various ways (i.e., by providers or outreach workers, over-the-counter, etc.). Secondary distribution of HIV self-test kits may also occur (e.g., to partners of ANC attendees, or clients of FSWs).

This indicator aims to monitor trends in the distribution of HIV self-test kits within a country at the lowest distribution point (i.e., between the distributer and the intended user(s)/recipient). The implementation of HIV self-testing programs should facilitate and enhance access to and uptake of HIV testing services for populations where HIV test uptake is low and undiagnosed HIV infection is high (i.e., men, adolescents/young adults, and key populations).

How to calculate annual total: Sum results across quarters

The suggested data source is a (newly developed) HIVST (HIV self-test) register or logbook. This will minimize any potential confusion with HTS_TST data collection and reporting since HIV self-testing is only a screening test and should not be reported under HTS_TST which only includes diagnostic testing. If a standalone HIVST register or logbook is not possible, revise existing HTS registers, log books, and reporting forms already in use to include very clear labels to indicate self-testing to prevent information entered in an HTS register from being counted and reported under HTS_TST or HTS_TST_POS.

For example, if an 18-year-old female reports to a testing site and receives a one-on-one testing demonstration for herself – the test for herself will be reported as directly assisted and you would provide the age/sex disaggregation data for one test kit distributed in the 15- 19-year-old age band. When she leaves the clinic, she takes two additional test kits along with her: one for her sex partner and one for her friend to use at a later time. The two test kits for her sex partner and friend would be counted as unassisted. For the age/sex breakdown under unassisted, 2 tests would go in the 15-19-year-old female age band because two tests were distributed to the female in that age band. The reporting follows the distribution of the test kits and not the age/sex demographics of the end user of the self-test kit. For the “test kit distributed for use by” disaggregate, you would indicate a ‘1’ in the ‘sex partner’ disaggregate for the test she planned to distribute to her sex partner and a ‘1’ in the ‘other’ disaggregate for the test she planned to distribute to her friend.

It is understood that registers and procedures for HIVST are still relatively new in many PEPFAR countries and specific distribution methods (e.g., vending machines) may not always allow for collection of detailed data on self-test kit distribution. As such, the only required disaggregate for this indicator will be for the type of self-testing (i.e., directly- assisted vs. unassisted). In addition, age/sex demographic information for test kits distributed using the directly-assisted self-testing model will also be required as these individuals should have received an in-person HIV test kit demonstration and demographic information should be collected at that time

Note: Although not required, implementing partners should attempt to document and report information about actual use of self-test kits. This includes who used the test kit, the test result from the self-test and linkage to retesting (if result is reactive), particularly when directly assisted HIVST occurs. Methods used may include request the return of the kits or follow up calls to determine outcomes. This information can further inform whether HIVST services are reaching individuals who may be HIV-positive and if those individuals are retesting to confirm their diagnosis.

The “directly-assisted” disaggregate should be reviewed to see if additional information was collected related to: 1) test result (negative or reactive) and 2) linkage for repeat testing to confirm a reactive self-test result. While not required for this indicator, this information should be collected by implementing partners as part of routine program monitoring. 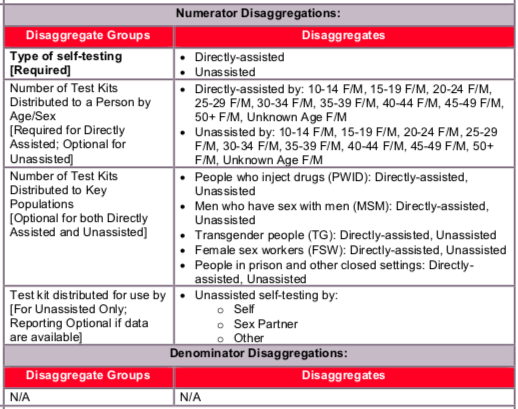 Test kit distributed for use by [For Unassisted Only; Reporting]:

This indicator aims to monitor trends in the distribution of HIV self-test kits within a country at the lowest distribution point.

Provision of key staff or commodities for the distribution of HIVST kits includes: ongoing procurement of HIVST kits or funding for salaries of providers who distribute or directly assist with HIVST including counselors, laboratory technicians, program managers, and community health workers. Staff who are responsible for the completeness and quality of routine patient records (paper or electronic) can be counted here; however, staff who exclusively fulfill MOH and donor reporting requirements cannot be counted.