This indicator will be tracked through routine program monitoring semi- annually through the POART process.

Given the elevated risk of HIV infection among children affected by and vulnerable to HIV, it is imperative for PEPFAR implementing partners to monitor HIV status among OVC beneficiaries, to assess their risk of HIV infection, and to facilitate access and retention in ART treatment for those who are HIV positive. When the implementing partner determines that the child is at risk of HIV infection, the program should refer children for testing and counseling services. When the implementing partner knows the HIV status, the program should ensure that the children are linked to appropriate care and treatment services as an essential element of quality case management. OVC programs should also play an important role in family-centered disclosure, for those who are HIV positive. The goal of monitoring OVC_HIVSTAT is to increase the proportion of children reported as active or graduated under OVC_SERV under age 18 with a known HIV status or for whom an HIV test is not required based on a risk assessment.

This is a snapshot indicator. Results are cumulative at each reporting period.

Method of measurement
How to collect:
Data sources for this indicator include HIV test results that are self-reported by OVC (or their caregivers), results of HIV Risk Assessments conducted by implementing partners, registers, referral forms, client records, or other confidential case management and program monitoring tools that track those in treatment and care.

Implementation of the HIV risk assessment should be integrated into case management and on-going case monitoring, and should not be conducted separately, if possible. This will vary by partner and project. The partners should work out a timeline based on their experience of how long referral completion and status disclosure usually takes and factor that into their case management processes.

Q1. Daniel reports to the community health worker (CHW) that he is negative, but his last test was two years ago. Is Daniel still reported as “Negative”, or as “No Status”, and needs to be risk assessed?

A1. Based on their knowledge of the child from case management records, if the CHW believes that the child has no risk of HIV infection (i.e., no one in the household is HIV+, they are not exposed to violence, child is not sexually active yet) then getting another test done is not necessary and would report them as negative. This applies mainly to younger children under age 12 (depends on average age of sexual debut in the country). For adolescents, we recommend getting risk assessed if the test was not conducted in the reporting period.

In that same scenario, what if the CHW decides to administer the HIV Risk Assessment to Daniel and finds that an HIV test is not indicated, how should that be reported? This should be reported as “Test Not Required Based on Risk Assessment” because once the CHW decides to conduct a risk assessment, this means that the child’s status is in question and that should be captured as No Status.

Q2. Elizabeth reports to the CHW that she is negative and had an HIV test within the past 6 months, but the CHW knows that she was recently exposed to something that could put her at high risk (e.g., GBV, sexually active), what should the CHW do?

A2. Because the CHW thinks that Elizabeth may be at risk of HIV infection, the CHW would conduct the risk assessment and she is no longer reported as “Reported HIV Negative”. If found at risk (e.g., GBV exposure) then she should be referred for testing. If determined to be Test Not Required Based on Risk Assessment Elizabeth would be captured as “Test Not Required Based on Risk Assessment”.

If she completes the testing within the reporting period and the caregiver is willing to disclose the result of the test, her response would be captured accordingly.
If she is risk assessed and referred for testing, but her caregiver is not able/willing to complete the test or disclose the status within the reporting period it is captured as “No HIV Status”. Hopefully by the following reporting period, the caregiver will have completed the referral and disclosed the child's status so it can be captured as positive or negative. It is understandable that the whole process from risk assessment to referral completion and disclosure may not be completed within 6 months and there be movement from “No HIV Status” to “Reported HIV positive” or “Reported HIV Negative” in future reporting periods.

Q3. What do we do when a caregiver refuses to disclose their status and the status of their child or refuses to complete an HIV test – even when the HIV risk screening tool indicates that their child is at high risk of HIV infection?

A3. A caregiver should never be forced to disclose their or their child’s status, the results of an HIV test, or to complete an HIV test. HIV status and completion of an HIV test are not required for enrollment in an OVC program. If a child is believed to be at high risk of HIV and the caregiver is reluctant to disclose results or complete a test, OVC programs should attempt to facilitate a meeting with the caregiver, and persons specially trained on HIV disclosure. OVC programs may also consider enlisting the support of community members with whom the caregiver has greater trust. Until the client chooses to disclose test results, status under OVC_HIVSTAT should be recorded as “No HIV Status.”

Q4. How do we report on HIV exposed infants who are still too young to have had their final HIV status testing?

A4. Because HIV-exposed infants may be tested at multiple points prior to receiving a final HIV status, we recommend that they be counted as "no status" until such time that the clinic determines their final status as positive (infected) or negative (not infected). A note can be entered in DATIM in the narrative section indicating the number of children entered as "no status" that are HIV-exposed (i.e., infants during the reporting period who were of undetermined status). It is important for all HIV-exposed infants and their caregivers to be facilitated to make appointments deemed necessary by the clinic.

Missing data should be documented under “HIV status unknown” or “Reported HIV positive- Not currently receiving ART or ART status unknown.” Potential reasons for missing data may include: 1) IP was not able to collect information from all caregivers of OVC_SERV<18 within the reporting period, 2) IP was not able to locate all the caregivers of OVC_SERV<18 (e.g., relocated, migrant work).

We recommend that IPs aim to move a newly enrolled OVC with HIV Status Unknown through the assessment cascade within the reporting period. A newly enrolled child would initially be considered “HIV Status Unknown” until he/she is risk assessed. If the OVC is found to not be at risk at present, he/she will be noted as “Test not required based on risk assessment.” If the OVC is found to be at risk, he/she will be referred for HIV testing and then the program will work with the guardian to disclose the results until he/she can be reported as “Reported HIV Negative”, “Reported HIV Positive – currently on ART” or “Reported HIV Positive – not currently on ART or ART status unknown”.

For children reported as ”HIV Status Unknown” in the previous reporting period, the IP should ensure that child is risk assessed, referred for testing if needed, and supported to disclose new test results. Children reported as “Test not required based on risk assessment” with no changes in their risk situation for the past six months, don’t need to be reassessed. If the IP believes the child’s risk situation has changed in the last six months, then the child should be reassessed by the implementing partner to determine whether testing is indicated and the results entered as outline above, and the child should receive appropriate follow-up.

Data sources for this indicator include HIV test results that are self-reported by OVC (or their caregivers), results of HIV Risk Assessments conducted by implementing partners, registers, referral forms, client records, or other confidential case management and program monitoring tools that track those in treatment and care.

Denominator is not collected again as part of this indicator, but is collected under the indicator OVC_SERV.

Modifications to standard definition of DSD and TA-SDI related to eligible goods and services:

Provision of key staff or eligible goods/services for OVC beneficiaries receiving care and support services in the community include: For beneficiaries of OVC services, this can include funding of salaries (partial or full) for staff of the organization delivering the individual, small group or community level activity (e.g., psychosocial support, child protection services, education, etc.). Partial salary support may include stipends or incentives for volunteers/para-social workers or paying for transportation of those staff to the point of service delivery. For goods or services to be eligible, goods or services (e.g., bursaries, cash transfers, uniforms) can either be paid for out of the implementing partner’s budget or be provided as a result of the IP’s efforts to leverage and mobilize non-project resources. For example, an IP may help beneficiaries fill out and file forms necessary for the receipt of government provided cash transfers, social grants, or bursaries for which they are eligible. Given the focus on long-term local ownership, IP’s are encouraged to mobilize goods and services whenever possible.

For care and support services, ongoing support for OVC service delivery for improvement includes: the development of activity-related curricula, education materials, etc., supportive supervision of volunteers, support for setting quality standards and/or ethical guidelines, and monitoring visits to assess the quality of the activity, including a home visit, a visit to a school to verify a child’s attendance and progress in school or observation of a child’s participation in kids clubs. 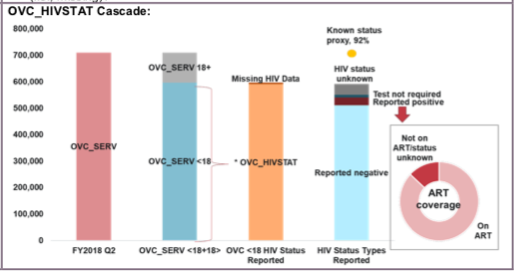